November 30, 2008 will be the last day for downloading the application. Then it will be in closed beta. 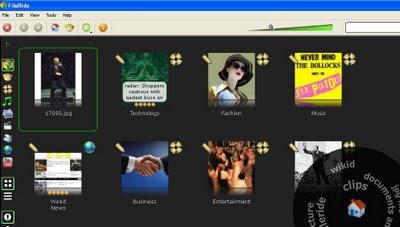 The FileRide application looks very good and sleek. For only 11MB of installer, it didn’t take much of my time to download the file and to finally install it on my PC.

After setting up my profile (actually I just setup my picture) I navigated my way through the fancy buttons that were presented to me. I was actually looking for the settings menu which probably let me customize the look and feel of the app but was dismayed to find none except the setting to play sounds and alerts.

The upper right corner had a blank box intuitively should be a search box and upon entering text, it matches up some items that were tagged as such. I was expecting much that it be the same as Google’s search – too many expectations though. I was given some Google results though that was of a different language.

On copying an image or a link or a file, it’s smart enough to detect that you have copied such and suggests you add it on FileRide.

As with most applications, I think it will take more navigation and more than a day to familiarize the app and the possibilities that it can offer.

odesk articles online technology
FileRide2008-11-292011-08-12http://fleirecastro.com/wp-content/uploads/fcsmaller.pngFleireCastro.comhttp://fleirecastro.com/wp-content/uploads/fcsmaller.png200px200px
About
Fleire Castro
Hello! I'm Fleire Castro and I manage Third Team Media - an award-winning boutique social media and digital agency offering data-driven marketing programs for companies and brands. This is my personal blog where I share my thoughts on social media, productivity, digital empowerment, and the internet.
Contact Us